It is glowworm season

Here are some UK glowworms 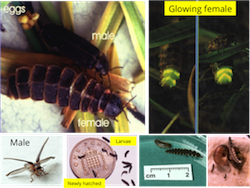 See a video here of females glowing in July

Glowworms are amazing. They are bioluminescent beetles. The female glows during June and July, and sometimes August, to attract a mate. Once it has mated it stops glowing, and lays its eggs a few days later, and then dies. The larvae hatch in about 3 weeks time. These flash when disturbed as a warning – do not eat me I taste horrible. The UK glowworms are closely related to fireflies. There are two species in Britain – Lampyrus noctiluca and Phosphaenus hemiptera (very rare, mate be extinct here). However the famous New Zealand glowworm is actually the larva of a fly, several similar species being found in Australia.

The light is produced by a chemical reaction – burning without fire, all the energy going into making cold light and no heat. The energy for All bioluminescence comes from oxidation. A small organic molecule, called a luciferin, is oxidised by oxygen the reaction being catalysed by a protein called a luciferase. Each animal group uses a completely different luciferase. The luciferin used by glowworms and fireflies is only used by them. Luminous jelly fish, shrimp, and copepods use a completely different luciferin called coelenterazine. Darwin had major problems with bioluminescence. He could not see how small change by small change could lead to a new phenomenon. In fact the first entry in his Beagle notebook was bioluminescence off the coast of Tenerife, caused by microscopic dinoflagellates. But we have solved this. Bioluminescence turns out to be a model for one of the greatest puzzles in evolution – the origin of a new enzyme (see Campbell, A. K. 2012. Darwin shines light on the evolution of bioluminescence. Luminescence, 27, 447-449 – pdf available on request).

email us any you have seen to info@theyoungdarwinian.com

See the Uk’s glowworm site set up by Robin Scagell http://glowworms.org.uk for sites near you. You must wait till it is very dark, for example after 10.30 at night.

It is World Firefly day this week, Se